If done right you will almost never notice it.. It is however one of the most used parts of any app: the sidebar.

With MarsManaged we’ve gone through quite a few iterations. Here’s a retrospective on the improvements made, and the thinking behind them. 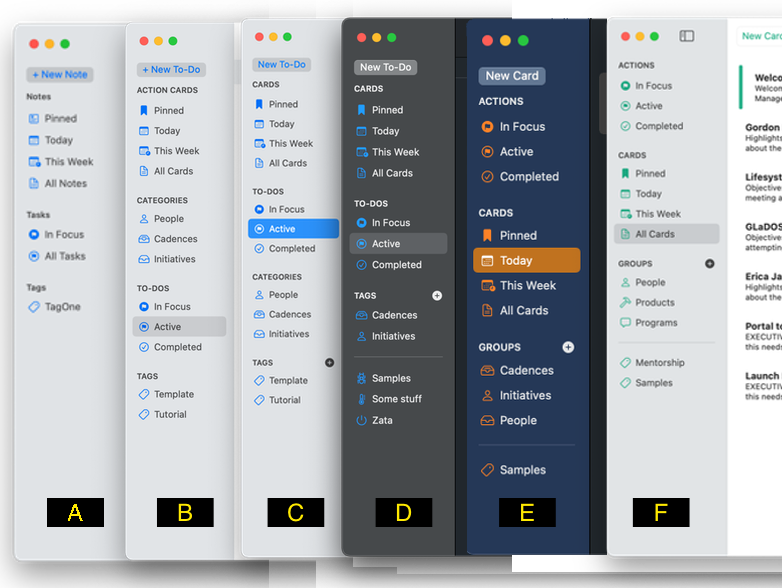 First Iteration (A): Although it was purely a SwiftUI non-functional prototype, the sidebar already contained all the key elements that would define the app -> notes, tasks and tags.

Second Iteration (B): To show notes are much more than just text and to indicate intent, Notes are renamed to Action Cards. For the first time we’re also including the concept of Categories, essentially non-deletable Tags.  Finally Tasks is renamed to To-Dos as it reads better.

Third Iteration (C): Minor tweaks here, Action Cards is simplified to Cards and Categories is moved below To-Dos. The reasoning being Tags and Categories should appear at the bottom as they group above elements. Another addition is the button to add a Tag from the sidebar, allowing users to quickly create new ones.

Fourth Iteration (D): A visually minor but significant change, categories no longer exist as their own element. They have now become regular Tags. Pinned ones to be precise. Pinned tags is a new feature where any tag can be pinned to appear above non-pinned ones, separated by a thin line.

Fifth Iteration (E): As To-Dos are linked to Cards, and Cards are linked to Tags, the order in which they appear on the sidebar is changed to reflect this functional reality (1. ToDo < 2. Card < 3. Tag). Two other changes you’ll notice is that, based on user-testing feedback, Tags is now called Groups and To-Dos has been renamed to Actions, better matching the app theme and showing intent.

Sixth Iteration (F): The New Card and New Action buttons are moved to the Toolbar, freeing the SideBar to only focus on the user content and giving MarsManaged a cleaner look. 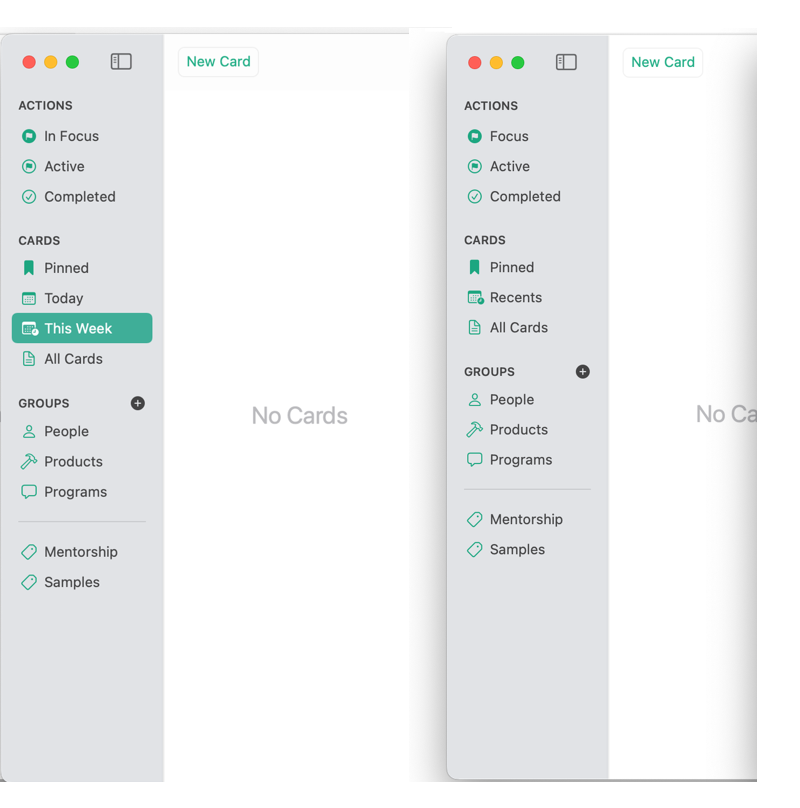 6th iteration on the left, 7th on the right

First, the cosmetic changes:  In Focus has become simply Focus and This Week has become Recents.

Second, the Today section is no longer available: although initially I thought it would be convenient for users, the reality is that I was wrong. Today would always be empty at the beginning of the day so users would end up always skipping Today and going to Recents instead, even when they wanted to see Cards they edited today.

So, here you have it, the evolution of the SideBar over almost a year, one of the most important parts of MarsManaged. What are your thoughts, anything I have missed? Let me know @MarcMasVi